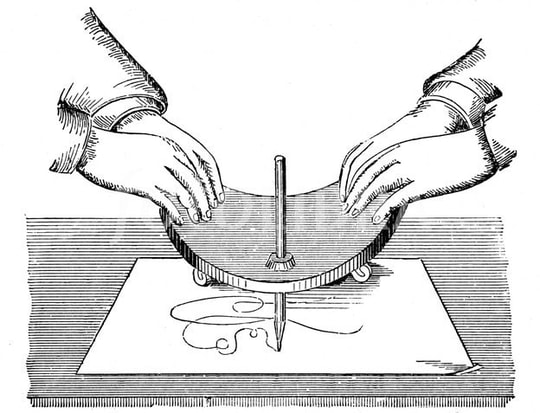 Spirit mediums play a very important role in Spiritism as a way of communicating vital information between the world of spirits and the world of mortals. The spirit medium, according to Allan Kardec, holds a specialized position, but it is ultimately open to anyone who is willing to learn and grow. Some mediums have a natural capacity for this kind of work, just like a musician might have a knack for playing a certain instrument, but the doors of mediumship are open to all people. In The Mediums’ Book Kardec lists a variety of different specialized mediums based upon how they interact with spirits and the means by which they might communicate these otherworldly messages. Kardec says that this list, along with the spiritual hierarchy, are the two most important charts that all Spiritists, mediums or not, should be familiar with. We will get into the importance of this list at a later time when we talk more about the role and work of the medium, but for now I’d just like to present the chart as Kardec did in The Mediums’ Book, as a way of showing the variety of practices mediums can have.
Firstly, mediums as a whole can be divided into two groups:
There are also certain qualities common to all of the various orders of mediums:
​Next Kardec begins talking about the variety of physical mediums that he had encountered. Note, there are so many other ways than just these. In my experience, there are as many techniques as there are mediums. But this is a really good place to start. Also note, Kardec includes in his descriptions how rare it was to find certain types of mediums. At one time this was very helpful in determining the likelihood that a medium was a fraud.