According to Allan Kardec in The Spirits’ Book, the spirit world exists on a hierarchy, or a sort of sliding scale, of ten levels. For the Spiritist the whole purpose of life is learning to be better. You try and grow as much as you can while in your embodied form, then as a spirit you continue learning more and more, and then sometimes you are able to return to a physical body and correct the mistakes you made in your last incarnation. Spirits, even those who are considered “evil”, never regress, we only move forward. It might be a slow progression, but that road only leads ahead, never backwards. 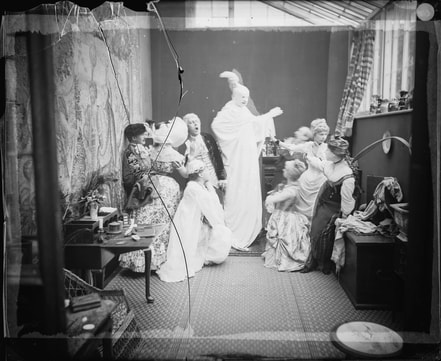 On one end of the spectrum are the Third Order Spirits, or what have traditionally been called “evil” or “impure” spirits. I prefer not to think of things as being divided between “good” and “evil” (because more often than not the world is very, very gray) and instead call these orders of spirits “ignorant”. They are ultimately unaware of their own purpose in the universe, and sometimes are even unaware they are dead. These are the errant ghosts, the tricksters, the ones who tend to haunt buildings and try to scare the inhabitants rather than learning about their own spiritual well being. Although they may seem scary, when you learn about the nature of spirits and why they act the way they do, you’ll come to see that even the loudest spirit can easily be silenced by talking to them about what their purpose is and what they want. Again, as spirits we only progress forward, and the learning process may be slow but it’s open to every spirit in the universe. This is one of the notions that really attracted me to Spiritism, the idea that even what we see as “evil” has a chance to grow and become better.
The Second Order Spirits are usually seen as our guides or guardians. Ancestral spirits that we really identify with are usually here. Spirits in this order realize that they don’t need to be angry, or sad, or hungry, and so they set themselves on the path of self awareness, towards the ultimate sense of altruism and helping others grow without any return for themselves. Spirits in this order are defined by their kindness, learned nature, and wisdom. They also have a desire to protect and visit their loved ones and help them to advance in they ways they need to.
​
While I refrain from calling Third Order Spirits “evil” I likewise avoid calling First Order Spirits“good” just because I prefer thinking of the universe in a little bit different way. Spirits of this order are defined by their sense of altruism as opposed to the other end of the spectrum: ignorance. Because Spiritists have tended to be from a Christian background, they have traditionally seen spirits at this level as being one with God, freed from all impurities and rebirths. I agree with the sentiment, but like the Bodhisattvas, I view the spirits of this level as foregoing the much desired “disappearing” from the universe to sit talking with the Higher Power, and instead they choose to use their wisdom to help others advance, grow, and move towards the same state of being. The spirits of this order are sometimes called our “guardian angels”, but they are basically pure beings who really want to help and actually know how to help.
​
Below is Allan Kardec’s hierarchy, with quotes about each level from The Spirits’ Book

10th Level – Impure Spirits
​“They are inclined to evil, and make it the object of all their thoughts and activities. As spirits, they give to men perfidious counsels, stir up discord and distrust, and assume every sort of mask in order the more effectually to deceive. They beset those whose character is weak enough to lead them to yield to their suggestions, and whom they thus draw aside from the path of progress, rejoicing when they are to retard their advancement by causing them to succumb under the appointed trials of the corporeal life…Certain nations have made of them infernal deities; others designate them by the name of demons, evil genie evil spirits.”

9th Level – Frivolous Spirits
​“They are ignorant, mischievous, unreasonable, and addicted to mockery. They meddle with everything, and reply to every question without paying any attention to truth. They delight in causing petty annoyances, in raising false hopes of petty joys, in misleading people by mystifications and trickery. The spirits vulgarly called hobgoblins, will-o’-the-wisps, gnomes, etc., belong to this class.”

8th Level – Haughty Spirits
​“Their knowledge is often considerable, but they imagine themselves to know a good deal more than they know in reality. Having made a certain amount of progress from various points of view, their language has an air of gravity that may easily give a false impression as to their capacities and enlightenment; but their ideas are generally nothing more than the reflection of the prejudices and false reasoning of their terrestrial life. Their statements contain a mixture of truths and absurdities, in the midst of which traces of presumption, pride, jealousy, and obstinacy, from which they have not yet freed themselves, are abundantly perceptible.”

7th Level – Neutral Spirits
​“They are not sufficiently advanced to take an active part in doing good, nor are they bad enough to be active in doing wrong. They incline sometimes to the one, sometimes to the other; and do not rise above the ordinary level of humanity, either in point of morality or of intelligence. They are strongly attached to the things of this world, whose gross satisfactions they regret.”
​
6th Level – Noisy Spirits
​“Spirits of this kind do not, strictly speaking, form a distinct class in virtue of their personal qualities; they may belong to all the classes of the third order. They often manifest their presence by the production of phenomena perceptible by the senses, such as raps, the movement and a normal displacing of solid bodies, the agitation of the air, etc. They appear to be, more than any other class of spirits, attached to matter; they seem to be the principal agents in determining the vicissitudes of the elements of the globe, and to act upon the air, water, fire, and the various bodies in the entrails of the earth. Whenever these phenomena present a character of intention and intelligence, it is impossible to attribute them to a mere fortuitous and physical cause. All spirits are able to produce physical phenomena; but spirits of elevated degree usually leave them to those of a lower order, more apt for action upon matter than for the things of intelligence, and, when they judge it to be useful to produce physical manifestations, employ spirits of subaltern degree as their auxiliaries.”

5th Level – Benevolent Spirits
​“Their dominant quality is kindness. They take pleasure in rendering service to men and in protecting them, but their knowledge is somewhat narrow. They have progressed in morality rather than in intelligence.”

4th Level – Learned Spirits
​“They are specially distinguished by the extent of their knowledge. They are less interested in moral questions than in scientific investigation, for which they have a greater aptitude; but their scientific studies are always prosecuted with a view to practical utility, and they are entirely free from the base passions common to spirits of the lower degrees of advancement.”

3rd Level – Wise Spirits
“The most elevated moral qualities form their distinctive characteristics. Without having arrived at the possession of unlimited knowledge, they have reached a development of intellectual capacity that enables them to judge correctly of men and of things.”
​
2nd Level – High Spirits
​“They unite, in a very high degree, scientific knowledge, wisdom, and goodness. Their language, inspired only by the purest benevolence, is always noble and elevated, often sublime. Their superiority renders them more apt than any others to impart to us just and true ideas in relation to the incorporeal world, within the limits of the knowledge permitted to mankind. They willingly enter into communication with those who seek for truth in simplicity and sincerity, and who are sufficiently freed from the bonds of materiality to be capable of understanding it; but they turn from those whose inquiries are prompted only by curiosity, or who are drawn away from the path of rectitude by the attractions of materiality. When, under exceptional circumstances, they incarnate themselves in this earth, it is always for the accomplishment of a mission of progress; and they thus show us the highest type of perfection to which we can aspire in the present world.”

1st Level – Highest Spirits
​“They have passed up through every degree of the scale of progress, and have freed themselves from all the impurities of materiality. Having attained the sum of perfection of which created beings are susceptible, they have no longer to undergo either trials or expiations. Being no longer subject to reincarnation in perishable bodies, they enter on the life of eternity in the immediate presence of God. They are in the enjoyment of a beatitude which is unalterable, because they are no longer subject to the wants or vicissitudes of material life; but this beatitude is not the monotonous idleness of perpetual contemplation. They are the messengers and ministers of God, the executors of His orders in the maintenance of universal harmony. They exercise a sovereign command over all spirits inferior to themselves, aid them in accomplishing the work of their purification, and assign to each of them a mission proportioned to the progress already made by them. To assist men in their distresses, to excite them to the love of good or to the expiation of the faults which keep them back on the road to the supreme felicity, are for them congenial occupations. They are sometimes spoken of as angels, archangels, or seraphim.”