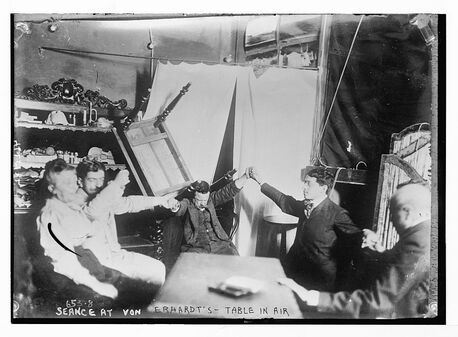 Relationships between mortals and spirits can be viewed in a positive or negative light. Sometimes when we encounter spirits the information given (and the experience in general) is enlightening and helpful. Other times we encounter spirits who just want to joke around, or who pose as well-meaning characters as a sort of trick. Identifying spirits of this type will be talked about at a later time. For this post I’d like to look at those negative interactions with spirits, or what people have historically called “hauntings” or “demonic possession”.

​In the light of Spiritism there are no demonic possessions, and there aren’t really even demons, in fact. There are only higher and lower order spirits. These can be viewed as “good” or “evil” but I tend to view them on the “ignorant” and “altruistic” spectrum instead. In Spiritism we don’t use the word “possession” because we believe that a person’s spirit cannot leave its body until death. Instead we use the word “obsession” meaning the influence (negative or positive, but most often negative) of one spirit over another, and in this case a spirit over the spirit contained within a sentient, living body. Obsession is seen as one of the major dangers in being a spirit medium, as it is easy to get ensnared by a troubled spirit but very difficult to escape. Once you know what obsession is, though, and how to prevent it, you’re not likely to be preyed upon by a lower level spirit, and you might even gain enough experience to help break other mediums free of such control.

There are three different types of obsession named by Allan Kardec. These are:
Simple Obsession

Simple obsession in its basic form is when a spirit (in this case a lower level or what we might call a “maleficent” spirit) imposes themselves upon a medium so as to either block all communications with other spirits, or pose as certain spirits so that only their messages can be heard. This is the easiest form of obsession to verify through direct questioning, as these types of spirits rarely try and conceal themselves too much. If the medium can keep on their guard, and remain skeptical, they can perform a simple back and forth with the spirit and are usually able to figure out that there is a lower level entity trying to force their way into the conversation. At this point, the medium can stop all communication, or call in their own guides to deal with the situation, or they might even talk with the interrupting spirit and try to get them to elevate, or turn from their lower order actions. This is the hard way, but one that many mediums feel is an integral part of their life’s purpose.

This category also includes all physical obsession, such as loud, spontaneous noises made not for communication but to annoy the listener. Most cases of haunted houses are connected to these trickster spirits trying to get a rise out of a person (which is in and of itself a form of simple obsession).
Fascination

This form of obsession is much more difficult to deal with. This represents a direct action of a spirit upon the mind of the medium. They are so enthralled by the confidence and messages given to them by the spirit that they are blinded to the fact that the messages are false and from a spirit who wants nothing more than to be a stumbling block for the medium.

Here’s what Kardec has to say about the differences between simple obsession and fascination:

“The difference between simple obsession and fascination is easily understood, as is also the different quality of the spirits by whom they are produced. In obsession, the spirit who attaches himself to us is only importunate and annoying from his tenacity; he is a being we are impatient to be rid of. In fascination, it is quite otherwise, for, in order to compass his ends, the evil spirit must be adroit, cunning, and hypocritical, imposing upon his victim, and getting himself accepted, with the aid of a false semblance of virtue, and a lavish employment of words and phrases, such as ‘charity,’ ‘humility,’ ‘the love of God,’ &c., which men are apt to regard as credentials, though the tenor of his communications show a degree of inferiority which only the fascination he exercises over his medium can prevent the latter from perceiving. A spirit of this class, therefore, dreads the presence of clear-sighted judges who would see through his deceptions, and directs his efforts especially to inspiring his victim with the determination to avoid every one who could undeceive him. By so doing, he avoids contradiction, and is always able to prove himself, in the eyes of his unfortunate medium, to be in the right.”

This form of obsession represents what historically we might have called “possession”. Here the intruding spirit has complete control over the functions of the medium, essentially controlling their spirit with their own. This can be morally, whereby the medium is led to say and do things contrary to what they might normally do. Sudden bursts of hatred or envy might define this category. This form of obsession can also manifest corporeally, whereby the medium might be thrown into a sudden violent rage which is completely against their everyday character.

Signs of Obsession From Kardec
Methods to Combat Obsession

The main method given to us by the spirit world is looking to a higher order spirit for aid. We all have guides, guardians, and ancestral spirits around us at all times, and we are told that well before you begin any acts as a medium you should appeal to and get to know your own guardian spirit. In most cases of obsession a medium either hasn’t appealed to any higher order spirit (i.e. they just rush into channeling as a sort of game) or they are performing some act that their guardian cannot condone, and therefore they let them become obsessed as a lesson. A higher order spirit is more than capable of handling all cases of obsession, and many mediums won’t ever even experience obsession within themselves because they have fostered good values within themselves and have trust in their guardians.

But some mediums are tasked with bringing others out of obsession. For this let’s look at what Kardec has to say first about bringing people out of fascination:

“But when mediums are fascinated, it is altogether different; for, in that case, the authority usurped by the obsessing spirit over his victim has no limits. The only thing to be done for the fascinated medium is to try to convince him that he is deceived, and to bring him back to a state of simple obsession; but this is never an easy matter, and is sometimes impossible. The ascendancy of the obsessing spirit may be so complete as to render the fascinated medium deaf to every argument, and even to persuade him, when he ventures on some assertion contradicted by positive science, that science is in the wrong. As we have already pointed out, the fascinated medium generally receives advice with a very ill grace; he is irritated by criticism, and takes a dislike to those who do not share his infatuation. To doubt the superiority of his beloved spirit is a sort of sacrilege in his eyes; and that is just the state of mind which the obsessor desires to maintain on the part of his victim…the best plan, when we find it impossible to open the eyes of a fascinated medium, is to leave him to his illusions. The sick man cannot be made whole as long as he hugs his disease, and refuses to follow the wise advice that would cure him.”

In cases of subjugation an outside source of help is always needed as mediums who are subjugated by a spirit are hardly ever able to help themselves. For people who are under this kind of spirit control the only help we can offer is by communicating with the spirit themselves, counseling them and asking them to leave, or communicating with a higher order spirit who is able to push away the imposing spirit with ease. These situations are always difficult and need to be approached cautiously. As Kardec says:

“We can only, in regard to this matter, give general counsels; for no physical action is of any use. There is no exorcism, no sacramental formula, that can drive away obsessing spirits…It is always well, in regard to the cure of obsession, to take counsel of a superior spirit, or of the guardian-angel of the person obsessed, through a good medium.”

To conclude, there might be many asking themselves what the point of Spiritism is if there are so many dangers to contend with. To that question I would like to quote Kardec on the matter:

“To sum up: the danger is not in spiritism, since spiritism enables us, on the contrary, to guard ourselves against a danger to which, without it, we are incessantly exposed, while unaware of its existence. The real danger consists in the propensity of many mediums to believe themselves to be the sole instruments of superior spirits, and in the fascination which blinds them to the absurdity of the statements made through them. But those who are not mediums may incur the same danger, as is shown in the following illustration – A man has, without knowing it, a secret enemy, who spreads abroad the vilest calumnies against him. He finds his affairs going wrong, his friends forsaking him, and his domestic happiness destroyed; for, being unable to discover the hand which stabs him, he cannot defend himself; and succumbs to his unseen foe. But the latter at length writes him a letter in which, despite his cunning, he betrays his identity and his machinations; and, as he is now discovered, his victim is enabled to confound him, and regains his former position. Such is the part played by evil spirits, and such is the aid which is given to us by spiritism in discovering and defeating their attacks.”