​What is Ozark Folk Healing? 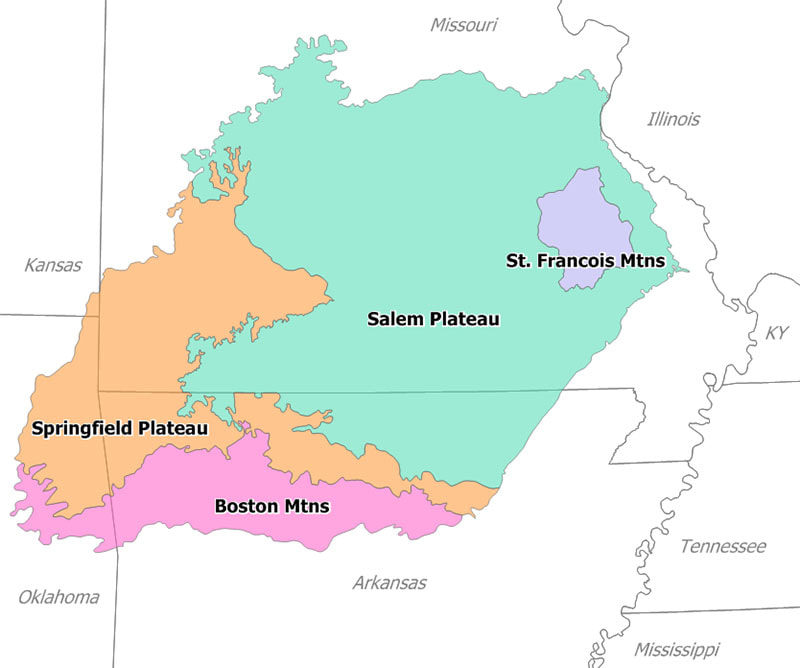 Ozark Mountain Region
Some of the best resources we have for these Ozark folk traditions come from renowned folklorists like Vance Randolph, Mary Celestia Parler, and Otto Ernest Rayburn. Many no doubt have a copy of Randolph's Ozark Magic and Folklore on their bookshelf right now. These folklorists spent much of their lives collecting and publishing material collected first-hand from Ozark hillfolk. These resources have become a vital link with our past in a rapidly changing region. Another significant amount of information has come from popular works like the “Bittersweet” and “Ozark Mountaineer” magazines, and even the well-known “Foxfire” books. This series, while not directly about the Ozarks, does cover folkways from the cultural homeland of the Ozark hillfolk in the Appalachian Mountains. While this cache of collected material has become integral to any studies on Ozark folk culture, we have to remember that the Ozarks have gone through many changes since the publishing of these works. Folk traditions in the Ozarks today no longer look like those that Randolph and others collected in the first part of the 20th century. ​
A problem arises early on for anyone studying Ozark folkways; it's very much a culture that is disappearing. Some would say dying, but I choose to say changing or evolving. There are still rural areas holding pockets of some of the old folkways, but for the most part, as with many other American folk traditions, most of this knowledge which at one time would have been so vital to survival, is now limited to the weekend fall festival, square dance, or museum reenactment. It would be an overstatement to call these folkways a living tradition in the Ozarks. There are still those in the region who are working hard to preserve what little material is still out there and to educate folks about these folkways before they're lost forever. I've been a part of this struggle for years now, collecting my own folk material and working methods of traditional healing into my own practice. While it's a sad sight seeing these traditions die off with every passing elder, we can't ignore the Ozarks of today and what this new culture has to offer. Before we do that, let's go back in time and examine where we've come from.
The plant-based category includes traditions of folk herbalism held by the community Yarb Doctor or Granny Woman. Both of these terms, as well as others that will be mentioned later on, come from out of the old Ozarks, although they can still be heard in isolated cases today. These medicines incorporate ingredients from the botanical world and include remedies that many would be familiar with even today. Herbal preparations include salves, ointments, tonics, tinctures, powders, drops, draughts, and many more. Much of the herbal knowledge of the mountain Yarb Doctor comes from a blending of traditions from across Europe and the knowledge of native plants offered by the indigenous peoples, particularly of the Southeast.
​One can note many similarities in remedies between those collected by folklorists like Vance Randolph and those that appear in the Appalachian Foxfire series. In many cases we see the uses and beliefs surrounding plants native to Europe later applied to New World examples that bore some resemblance to the original plant. For instance, the associations of European Mandrake (genus Mandragora) applied to the Mayapple (Podophyllum peltatum,) often called American Mandrake.

The non plant-based category includes the use of items of great healing value that were repurposed from household tools and paired with prayers, verbal charms, and ritual, in order to magically heal a patient. This would be the expertise area of the Power Doctor and the Goomer Doctor. The Power Doctor heals through the use of magical charms, prayers, and is an expert in ritual and the making of talismans. Occasionally they might have some herbal knowledge that they bring into their work, but most often, any use of plants is through their magical, not medical, properties. The category of Power Doctor stands on its own, but might also include such specialized healers as Blood Stoppers, Burn Doctors, Wart Charmers, and sometimes even the local preacher. The Goomer Doctor deals with all cases of goomering, meaning hexes, curses or any malign witchcraft that might be put onto someone. Also sometimes seen is the Witch Doctor, or Witch Master, also able to cleanse a person of any magical maladies. The Witch Doctor isn’t himself a witch, but someone skilled in removing the effects of witchcraft on a person. It should be noted that in most Ozark accounts, the word witch is seen in a negative light and refers to someone who uses their magical gift to harm or steal from others. The witch stands in direct opposition to the Doctor, whose gift is said to come directly from God or another divine source, and acts as a foil to the witch’s work. There are exceptions, as with the water witch, the witch wiggler, both names for traditional dowsers, able to find underground water sources through magical means, and the white witch, little used in the Ozarks, but often heard in the Appalachian Mountains. Healers are always cautious when using the word witch and often walk a very thin line between what is socially acceptable and what isn’t. Ozark people often tread in a gray area when it comes to magic and healing. A healer who prays, believes in God, and does good works in the community must then be considered good. A healer must constantly be vigilant about how they appear in the community, lest they be taken for a witch in disguise. While we Ozarkers don’t worry so much anymore about witches, it’s still a thin line that healers walk. Nowadays it’s a line between what is helpful and what those who don’t believe might label as quackery.

There have been and still are healers whose expertise covers both the plant-based and non plant-based medicines. The trend over the past fifty years or so has been that the magical and religious healing traditions are dying at a much quicker rate than the herbal knowledge. One reason for this is an increase in interest in herbal and alternative medicines since the 70's and 80's. The Ozarks have always been a hub of herbal activity, providing many useful plant medicines to pharmaceutical corporations as well as the local herbalist or naturopath. With this increased interest in herbal medicines the need for more and more scientific validation behind herbal preparations has forced the faith-based or magic-based healing traditions to retreat into the shadows. My experience has been that these practices no longer go hand-in-hand with herbal medicines as they once used to, and are more likely to be labeled as vestiges of a more superstitious past by researchers. One can understand why many modern Ozark people might want to disassociate themselves with anything related to these old traditions and so-called superstitions of their parents or grandparents. Someone who was passed a healing charm now finds themselves without any kin or interested listener to then pass it on to, and so the charm dies. By its very nature, many of these practices depend on having someone to pass the knowledge to, almost always orally, and most often with the understanding that the traditions will be used and not recorded in any way. There has always been a taboo against writing down or recording much of this traditional knowledge. In this way, many of the Ozark healing knowledge and practices are naturally susceptible to forgetful minds and the changing times.
As a modern Ozarker living in an ever-changing Ozarks, I find myself at the crossroads between the traditions of my past and those of my future. For many old timers, change is an unwelcome force to their day-to-day lives. “It was better in the good ol’ days!” they say, but for who? For minorities it wasn’t so great. For anyone who was different or stood on the fringes of society it was a terrible time. In the old Ozarks, the local witch was often this person. Sometimes a widow, or someone with a disability, or someone who just plain didn’t like people, could easily be pushed to the edge of town. This isolation from society was often the nail in the coffin for hillfolk, many who depended upon the amenities of life in town. Exile was the best option for a witch, though, as hillfolk were known for lynching witches, people of color, and those caught in the arms of the same sex well into the 20th century.

This vehement hatred for change remains throughout the older generations, but we see today an evolution of what it means to be an Ozarker as more and more people from diverse backgrounds arrive in the area. What are our Ozark traditions today? How can we keep the candle of the past burning while still embracing new folkways and identities? This process requires a good amount of pruning. There are folk traditions that should be studied but not practiced. For instance, the old Ozark remedy for the terrible skin condition called shingles once was to cut the throat of a black cat and rub the blood in a circle around the afflicted area. So, you know, that’s probably not something we should bring with us into the future. There are other traditions that need pruning, but at the core of Ozark folk culture is this connection to the land, the plants, hills, hollers, and rivers that make up the natural landscape for us, and what that connection means for us spiritually and magically.

​For the longest time city-folk, or those living in farming communities throughout the old Ozarks were rightfully afraid of the monsters that lurked up in the hills and the people that knew how to tame them. This fear didn’t go away, despite what people in town might say. There’s still a suspicion about the wildness of the Ozarks and what magic might lie hidden in the trees. For the healer this is the heart of the magical world, this is power. Herein lies our connection to what it means to be an Ozarker; a deep connection to the land that we can see and the land we must use other eyes to view. This connection crosses all cultural and personal boundaries. In this way, we as a younger generation can embrace the strength and wisdom of the past while understanding that all traditions must evolve.